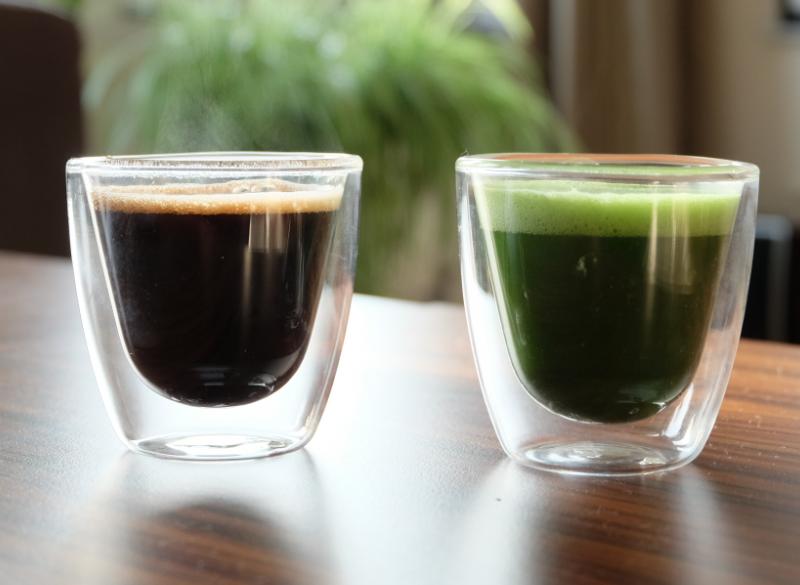 Matcha tea is a specially grown and powdered tea with a high level of L-theanine. The l-theanine amino acid increases attention levels, memory and mood. Drinking Matcha tea l-theanine can improve your health, concentration and general mental performance. The underlying mechanisms are still a matter of debate.

Reading time: 15-30 minutes. Content is skimmable though using the headings.

Introduction: Food as a drug

The phrase ‘the dose makes the poison’ (von Hohenheim, 1538) lets us consider any substance as a toxin. This includes substances like water, which has caused a death on live radio due to overconsumption (Williams, 2007). Likewise many substances used daily can be considered psychoactive. This ranges from toxicity in alcoholic beverages (Bondy, 1992) to altered mood states after consuming caffeine (Rogers, 2007). Many substances we commonly consider food however alter behavior through neurological mechanisms. Examples include behavioral changes when l-tryptophan intake is increased to 1 gram a day (Moskowitz, Pinard, Zuroff, Annable, & Young, 2003), which can be done with a single egg white (USDA, 2014).

Green tea is produced from the leaves of Camellia sinensis variations sinensis and *assamica *(ITIS, 2009). Matcha tea specifically is made from ground Gyokuro leaves. Tealeaves grown in the shade about 20 days before harvest are used to make dried tealeaves called Gyokuro, they are the opposite of the sun grown Sencha (Yamaguchi & Shibamoto, 1981). The significance of this is that shade grown plants have higher concentrations of endogenous amino acids like caffeine and l-theanine (Kakuda, 2002). A high grade matcha tea can contain four times as much l-theanine than a low grade sencha (Kakuda, 2002).

Green tea is strongly indicated as a healthy beverage. Matcha is chemically a concentrated form of green tea. It could serve as a benefit to those suffering from cognitive impairment or those seeking to improve their daily lives. Therefore this paper investigates what are the cognitive effects of Matcha tea, specifically that of its high l-theanine concentration.

There have been a number of substances hypothesized to cause cognition effects of green tea, which have traceable effects on the brain. It appears to counter β-amyloid, which marks it as a potential Alzheimer’s disease treatment enhancement.

L-theanine is an amino acid found in green tea. Like the polyphenols present is has shown counter induced memory impairment. It reduced β-amyloid presence and experiments observed that it suppresses ERK/p38 and NF-κB and reduces macromolecular oxidative damage. (Kim et al., 2009) This paper will focus on the cognitive and neurological effects of L-Theanine on healthy individuals.

The Effects of L-Theanine

As stated before, l-theanine has beneficial effects on induced memory impairment and Alzheimer’s scenarios. This however has little impact on individuals seeking cognitive enhancement. It may serve as an indication.

L-theanine is synthesized from the *Camellia sinensis *roots and accounts for up to 50% of the amino acids in green tea leaves. It is synthesized from glutamate. (Nathan, Lu, Gray, & Oliver, 2006) Little to no research has been done into human pharmacodynamics of l-theanine, animal studies give an indication (Nathan et al., 2006). It is absorbed in the intestines using a Na+ co-transporter also used for glutamine (Kitaoka, Hayashi, Yokogoshi, & Suzuki, 1996). The kidney is responsible for converting it to glutamic acid and ethylamine for further processing (Unno, Suzuki, Kakuda, Hayakawa, & Tsuge, 1999). L-theanine crosses the blood-brain barrier using the leucine-preferring transport system. In animal studies serum level peaked after 1 hour, while central nervous system levels peaked 5 hours after administration. Levels decline over the course of 24 hours. (Terashima, Takido, & Yokogoshi, 1999)

In rats a dose related increase was observed in the stratium after ingestion. This effects seemed to be mediated by the use of NMDA receptors since an NMDA receptor antagonist decreased the effect of l-theanine on dopamine (Yokogoshi, Mochizuki, & Saitoh, 1998). Later the dopamine release was attributed to glycine release as a result of l-theanine activating AMPA receptors. (Yamada et al., 2009)

L-theanine binds to the NMDA, kainate and AMPA glutamate receptors and blocks the binding of glutamate. Although the affinity of l-theanine is much lower than that of glutamate, it has been implicated in neuroprotective effects in cortical neurons. (Kakuda, Nozawa, Sugimoto, & Nino, 2002) 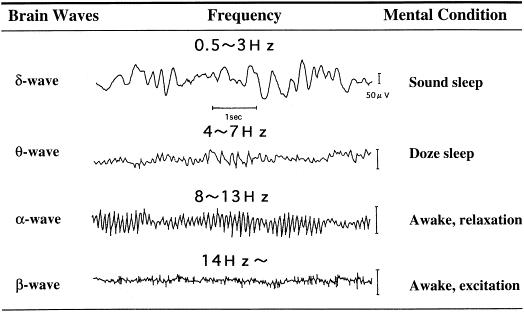 EEG measured brainwaves are classified into the categories Beta, Alpha, Gamma and Theta. The Beta frequencies are associated with excitation, Alpha with relaxed attention, Gamma with dozing off and Theta with deep sleep. What is however also important is where in the brain which frequencies are present and to what extent, all frequencies are usually present in some concentration or another. (Juneja, 1999) An oral dose of 200mg l-theanine showed significant increase in Aplha brainwaves was observed in subjects. (Juneja, 1999) 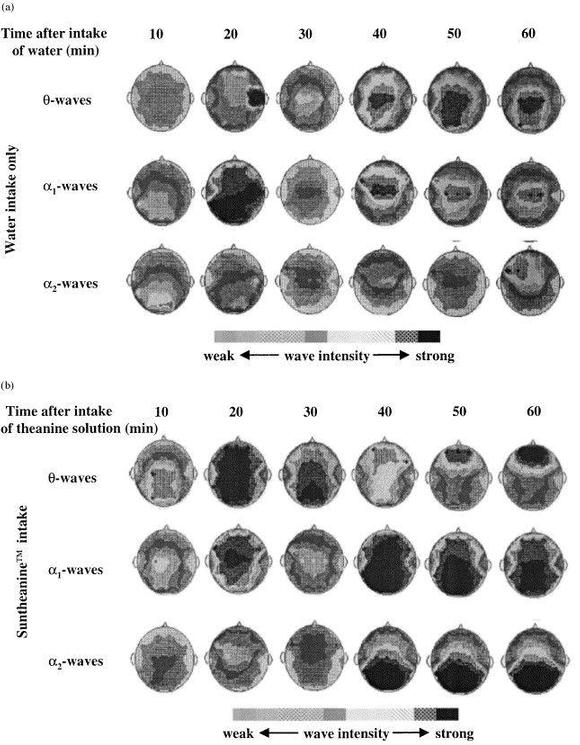 When administered to spontaneously hypertensive rats l-theanine reduces systolic and diastolic blood pressure. The control substance glutamine did not have this significant effect, although the structure is very similar. (Juneja, 1999) This effect may be linked to the effects l-theanine has on serotonergic neurons.

Theanine has been shown to decrease the stress response on psychological and physiological levels. (Kimura, Ozeki, Juneja, & Ohira, 2007) The full mechanism is not known since glutamate receptor agonism is relatively weak. (Kakuda et al., 2002)

The above findings are all strong indications for an enhancement of cognitive benefits. Direct studies however have also been done.

Rats have shown to improve at the Operant learning ability test when given l-theanine over a longer period of time. (Juneja, 1999) The aforementioned Alpha brain wave concentration increase has been associated with increased learning ability. (Bryan, 2008)

The cognitive effects of Matcha tea and its high l-theanine concentration are present in both healthy and cognitively impaired individuals. It may be used to counter Alzheimer’s induced deficit, or boost the performance of healthy individuals. With regards to Alzheimer’s the lowering of β-amyloid is desirable. Aditionally the effects observed in healthy individuals are also desired in such a case to combat cognitive decline. In healthy individuals the change in neural chemistry results in better performance on many fronts, neuroprotective effects and a lowering of blood pressure. We can observe changes in performance in direct test and brainwave alteration in EEG measurements. These findings indicate that the consumption of Matcha may be used to boost performance in the healthy, and play a role in the prevention and management of diseases like Alzheimer’s that cause cognitive decline. Most of these effects however are deduced from animal studies and relatively small human studies. Many of the neurological experiments have been conducted decades ago and have not been replicated since. To get a better view of the effects of l-theanine more human trials must be conducted. The mechanisms of action are not fully understood. While effects on neurotransmission have been found, the pathway through which these alter performance are unknown. Further research on healthy individuals is needed to confirm the effects of l-theanine on cognition, and to explore which forms of cognition are affected. Research in cognitively impaired groups is needed to explore what mechanisms prevent, hamper or treat decline.

Bailey, C. (2013). 9 brain foods that will improve your focus and concentration. Retrieved May 24, 2014, from http://ayearofproductivity.com/9-brain-foods-that-will-boost-your-ability-to-focus/

Conlon, C. (2014). 11 Benefits of Green Tea That You Didn`t Know About. Retrieved May 24, 2014, from http://www.lifehack.org/articles/lifestyle/11-benefits-of-green-tea-that-you-didnt-know-about.html