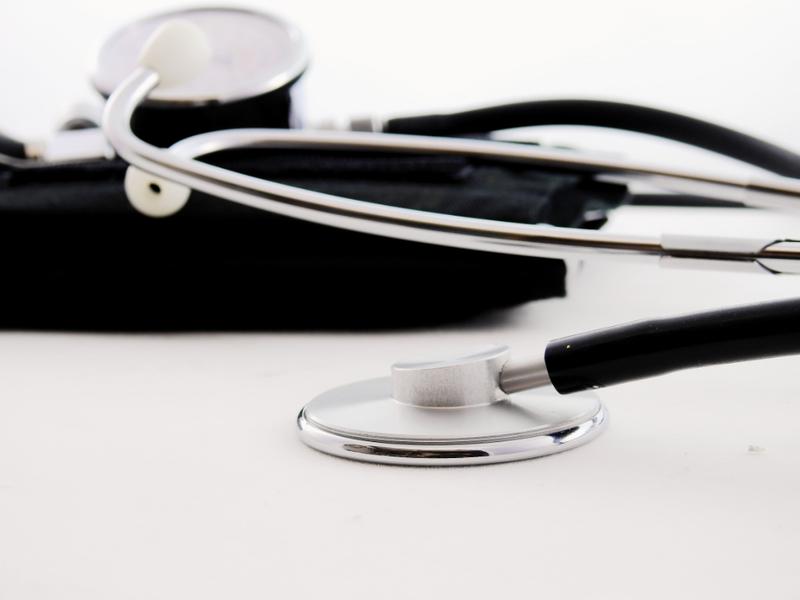 Last week I had nothing but a teaspoon of coconut oil for 4 days. My friends and family were not all that surprised to see me do some weird protocol again. It's not just me being a goofball though. Fasting could potentially:

I have been fasting for 16 hours a day for years now (see this post). The reason I do it is simple: I potentially gain a lot in the long term (see Ageing Research Reviews), and I lose nothing in the short term. In fact even if it doesn't affect my lifespan, the convenience of not having to worry about food all day is great for productivity and peace of mind.

See this image from Insulin, IGF-1 and longevity 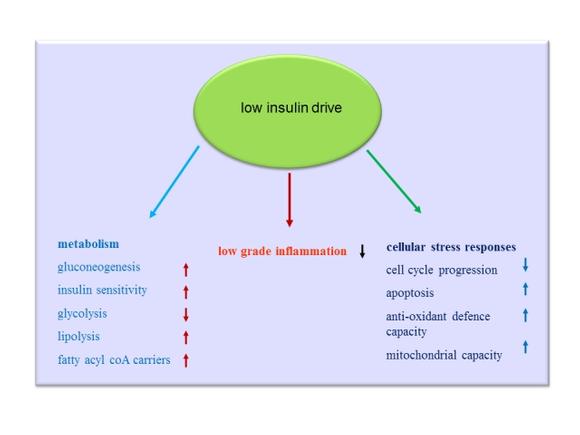 I chose to do a strict interpretation of the fasting mimicking diet which potentially has a whole host of benefits (see Cell Metabolism): 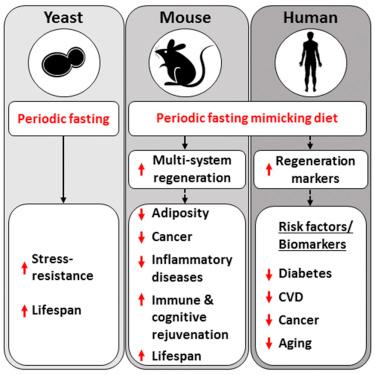 As you can read below, evidence for the benefits is not conclusive and mostly studied in animals. My choice was simple though:

I use coconut oil because it is high in medium chain triglycerides which the body can easily transform into ketones.

For measuring blood glucose and ketones I use the Freestyle Optium Neo. Note that you need to buy ketone strips separately.

Fasting research has traditionally been done on animals like rats and flies.

Research on IF benefits goes back decades

More recent studies try to find out why

More recently there have been numerous studies showing benefits to all sorts of systems like the cardiovascular system, nervous system, metabolic system and inflammation function in all sorts of animals from rats (The Journal of Nutritional Biochemistry, Circulation journal, FASEB)to rabbits (FEBS, Journal of Molecular and Cellular Cardiology).

Conclusion: there are many benefits in animals

From this American Society for Clinical Nutrition 2007 review of historical papers:

Caloric restriction has been widely reviewed now to have benefits, as per this 2012 Ageing Research Reviews paper:

Not only that but from this 2003 PNAS study:

Intermittent fasting therefore has beneficial effects on glucose regulation and neuronal resistance to injury in these mice that are independent of caloric intake.

In other words, intermittent fasting might have the same effects as caloric restriction, without having to eat less!

Research in humans is often focussed on biomarkers rather than lifespan-long studies. For example a study might find that fasting reduces fasting insulin levels, which might increase lifespan. The reality is that studying a human for a full lifespan is difficult and expensive (and rarely ever done). The research that has been done though is promising.

Quite a lot of research is done into caloric restriction, e.g. not eating too much. See for example the study Biomarkers of Caloric Restriction May Predict Longevity in Humans) in Science and Effect of 6-Month Calorie Restriction on Biomarkers of Longevity ... in JAMA.

The research can be divided up into two areas of interest for humans:

Ideally it would influence both of course, and most of the effects actually do. The lifespan effects below for example while possibly extending life also decrease risk for common age related diseases like diabetes.

Research for both is again mostly done by use of biomarkers and genetic activity measurements.

There has been no hard link, but there are signs pointing in the direction that good insulin sensitivity and glucose may increase lifespan.

our study demonstrates that centenarians compared with aged subjects had a preserved glucose tolerance and insulin action.

Other studies seem to confirm this (see Experimental Gerontology):

the offspring of nonagenarian siblings showed a lower prevalence of metabolic syndrome and better glucose tolerance than their partners, centralising the role of favourable glucose metabolism in familial longevity

A little note: insulin, glucose and the surrounding system are quite complex. There are many regulating elements like for example adiponectin that influence the sensitivity of the rest of the system.

To quote Insulin, IGF-1 and longevity and Stressing the role of FoxO proteins in lifespan and disease:

When humans fast we start burning the fat that our body has stored. This causes stress in our cells (see Insulin, IGF-1 and longevity):

While this sounds bad, the body buffers this by telling cells that can't take the pressure either repair (through autophagy) or to kill themselves (through apoptosis).

Again from Insulin, IGF-1 and longevity:

One potentially important factor in ageing is the activity of Insulin-like growth factor 1 (IGF-1) hormone. In many animals lowering IGF-1 seems to have life-extension benefits (see Ageing and Disease Journal).

In the roundworm Caenorhabditis elegans, single mutations that diminish insulin/IGF-1 signaling can increase lifespan more than twofold and cause the animal to remain active and youthful much longer than normal

Note that in humans research results have been complex and conflicting. We're not sure exactly how IGF-1 fits into longevity. From the same analysis as above:

results from human studies have been conflicting and controversial

findings suggest that IF combined with CR and liquid meals is an effective strategy to help obese women lose weight and lower CHD risk.

These findings suggest that IFCR with a liquid diet favorably modulates visceral fat and adipokines in a way that may confer protection against CHD [coronary heart disease].

A randomised trial in the International Journal of Obesity found similar results:

A healthy brain when getting older would be nice. As it turns out here intermittent fasting too has great effects (see Ageing Research Reviews):

caloric restriction (CR) and intermittent fasting (IF), can prolong the health-span of the nervous system by impinging upon fundamental metabolic and cellular signaling pathways that regulate life-span

Research in humans is more sparse, but rodents are giving us helpful clues. See:

Relation between fasting & the ketogenic diet

When fasting, the body creates energy from stored fat. This is very similar to the Ketogenic diet where you eat mostly fat. Both will get your body into ketosis, a state where the body relies on low blood sugar and high blood ketones for energy.

For those among you who already know about the ketogenic diet, These are my blood ketone levels measured while fasting:

That is very solidly into nutritional ketosis (which is usually defined as between 1 and 3 mmol, see wikipedia).

Why does this matter? Well, ketosis has many of the benefits of fasting. This post will not dive into the details of ketosis, but see these studies:

As you can see there is some very interesting research on all sorts of diseases that might benefit from nutritional ketosis. From ALS to epilepsy to cancer.

Note: I'm not saying ketosis or fasting cures any of these. I'm saying there is some interesting research in animals that shows promise of ketosis and fasting combined with traditional therapy.

Caloric restriction and ketogenic diet are effective against cancer in animal experiments while the role of intermittent fasting is doubtful and still needs exploration. More clinical experiments are needed and more suitable patterns for humans should be investigated.

Fasting does however seem to increase the effectiveness of chemotherapy while reducing side effects, see Fasting Cycles Retard Growth of Tumors and Sensitise a Range of Cancer Cell Types to Chemotherapy:

Short-term starvation (or fasting) protects normal cells, mice, and potentially humans from the harmful side effects of a variety of chemotherapy drugs.

The Fast Mimicking Diet by researcher Valter Longo (see wikipedia) aims to provide people with a way to reap the benefits of a multi-day fast while still being allowed to eat a small amount of specific things. It has some remarkable preliminary results, see for example these papers:

Conclusion: Possibly many benefits, no downside

Human research is expensive, and not a lot of long term studies have been done. Most likely not very many will be done at all. After all, there is very little money to be made from telling people not to eat.

The research that has been done though all seems very favorable, showing short term benefits and effects that may result in great long term effects.

Since there seem to be no downsides to doing this (including no loss of muscle mass, see European Journal of Sport Science) it is a no brainer for me.